The Muslim Quarter in Xi’an, China, is an amazingly huge food hub! Lot’s of tantalising meat, fresh fruits and whimsical tidbits all ready to be served and feast upon. Upon our arrival in Xi’an, my buddy and I stopped overnight at the airport (which I will cover in the next post) and cabbed down a distance of about 30km to Alley Youth Hostel the very next morning. Now I have to emphasise that we made this trip in December and it was exorbitantly cold. It was my first winter experience and typically having to blow out smoke from the mouth was our frequent gesture in Xi’an. All I could think of while we were in the cab was, the itinerary planned for the days ahead and how thrilling the winter cold can be.

Now Alley Youth Hostel is placed at a district with great atmosphere, whereby considerable walks can be taken to visit the famous Xi’an Mosque, various subway stations, the Xi’an Bell Tower, alluring cafes, and many other incredible sights and sounds for the taking. The first thing we had to do was eat and breakfast was a LARGE piece of handmade bread, served alongside a steaming hot spicy beef soup! It was HEAVENLY~

Another version of Xi’an’s famous bread. However, the one we had for breakfast was fluffier~

The bread was tasteless and powdery on its own but as I observe how the locals eat it, they tear that brown fluff into pieces and throw it into the soup. We did just that and that’s where it hits the sweet spot in your tongue! So, here’s a traveller’s tip: Be perceptive and willing to engage in (what seems to be an) unorthodox savoir-faire – as long as it doesn’t go against your religious practices or own set of beliefs.  Because from where I come from, we do eat bread with soup by dipping or swabbing but never throw it all into pieces at once down the hot broth. Resultantly, due to our brave “endeavour” the bread soaked up all the flavours and seasonings to blend with the existent handmade flour which induces an elated satiation to the tummies of two famished travellers.

Here’s my buddy after breakfast. 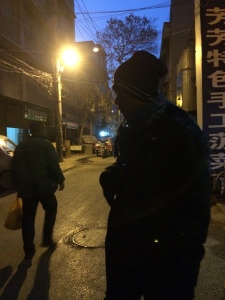 We were greeted by a cat named Chunlou or Chunliu (at least that’s what the lady at the reception says – the cat was named after some famous mountain in China) at Alley Youth Hostel, and the whole interior was pleasingly warm and welcoming as they furnished a book cafe right next to a pool table, which is just beside a bar and has got a mini internet surfing spot by the entrance window.

I call this shot ‘Chunlou by the Windou’. She was observing some birds on a tree by the way. 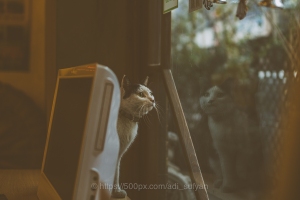 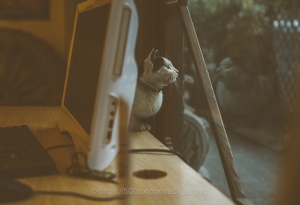